On April 17, 2013, a paper arrived in the inbox of Annals of Mathematics, one of the discipline’s preeminent journals. Written by a mathematician virtually unknown to the experts in his field — a 50-something lecturer at the University of New Hampshire named Yitang Zhang — the paper claimed to have taken a huge step forward in understanding one of mathematics’ oldest problems, the twin primes conjecture.

Editors of prominent mathematics journals are used to fielding grandiose claims from obscure authors, but this paper was different. Written with crystalline clarity and a total command of the topic’s current state of the art, it was evidently a serious piece of work, and the Annals editors decided to put it on the fast track.

Just three weeks later — a blink of an eye compared to the usual pace of mathematics journals — Zhang received the referee report on his paper.

“The main results are of the first rank,” one of the referees wrote. The author had proved “a landmark theorem in the distribution of prime numbers.”

Rumors swept through the mathematics community that a great advance had been made by a researcher no one seemed to know — someone whose talents had been so overlooked after he earned his doctorate in 1991 that he had found it difficult to get an academic job, working for several years as an accountant and even in a Subway sandwich shop.

“Basically, no one knows him,” said Andrew Granville, a number theorist at the Université de Montréal. “Now, suddenly, he has proved one of the great results in the history of number theory.”

Mathematicians at Harvard University hastily arranged for Zhang to present his work to a packed audience there on May 13. As details of his work have emerged, it has become clear that Zhang achieved his result not via a radically new approach to the problem, but by applying existing methods with great perseverance.

“The big experts in the field had already tried to make this approach work,” Granville said. “He’s not a known expert, but he succeeded where all the experts had failed.” 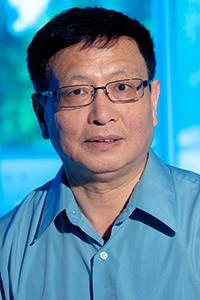 “There are a lot of chances in your career, but the important thing is to keep thinking,” Zhang said.