This professor criticized the lack of rigor in today’s math education, in particular, there exists universally a prevalent ‘ambiguous’ gap between high school and undergraduate math education.

I admire his great insight which is obvious to those postwar baby boomer generation.

I remember I was the last Singapore batch or so (early 1970s) taking the full Euclidean Geometry course at 15 years old, and strangely in that year of Secondary 3 Math (equivalent to 3ème in Baccalaureate) my (Chinese) school had 2 separate math teachers for Geometry and Elementary/Additional (E./A.) Math.

Guess what ? the Geometry teacher was an Art teacher. It turned out it was a blessing in disguise, as my class of average Math students who hated E./A. Maths all scored 90% distinctions in Geometry. We did not treat Geometry like the other boring maths. The lady Art teacher started on the first day from Euclid’s 5 axioms, one by one as the days went by through the year, she derived each theorem with rigourous proof based on axioms and previous proven theorems. When a tough problem seemed too difficult, we were amazed by her astute ‘dotted line’ (补助线) technique, and voilà, we suddenly saw the relationship of the angles or triangles.

(This ‘dotted line’ once was used by my university French professor in Physics, he was very proud of finding a similar triangle relationship in the trajectory of a satellite revolving the earth – he was ‘awed’ by the French classmates who skipped the traditional Euclidean Geometry in lieu of the modern abstract Affine Geometry).

It may be a wise decision that Euclidean Geometry, now excluded from the main stream Math syllabus, be embedded in Art Class. Afterall, the great artists like Leonardo da Vinci applied Perspective Geometry in their art.

The professor challenged the development of these Math coursewares from the “First Principles”, a la Euclid’s Rigor: Group Theory, Combinatorics, etc. 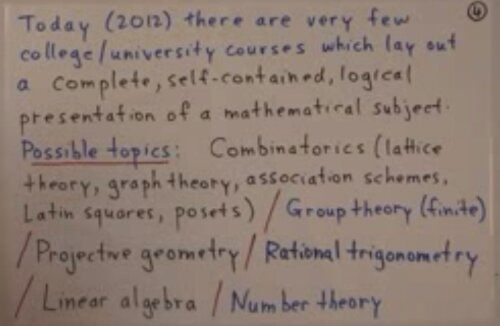 Don’t forget history tells us that Mathematics originated from the Greek Geometry (Plato Math School “Lycée” : “Let no one who ignores Geometry enters this (school) gate. “), Euclid’s rigor influenced us for 3,000 years until 1900. The Modern Math conjectures like The Fermat’s Last Theorem from Number Theory was finally solved after 380 years by Geometry (Elliptic Curve from Shimura-Taniyama-Weil Theorem) in 1994.

The most difficult Math Challenge of today is the Langrands Program in unifying all Mathematics, with the hope of using the André Weil’s “Rosetta Stone” to ‘translate’ 3 distinct Math languages: Algebra, Analysis via the bridge of Geometry (Alexander Grothendieck’s Sheaf).

From the past IMO (International Math Olympiad) champion countries, notice that the Russian and Chinese school of Math do better than the western countries, because out of 6 IMO questions there are often 2 in Euclidean Geometry – a weakness in western school math syllabus (including Singapore which models on UK) for dropping Euclidean Geometry in schools, but the Russian and Chinese wisely keep it.

One thought on “The Gap of Today’s Math Education: Rigor 严谨”