The “Singapore Math” , an invention by Singapore Prof. Lee Peng Yee 李秉彝 of ex-Nantah (now NTU-NIE) in the 1980s, is a combination of :

Note: However, there are pros & cons of this Singapore Math, revealing its weaknesses in post-secondary / university Math education with too applied less theoretical foundation.

Answer : Try before scrolling down

Copy above, then open 头条， this article window will pop up: 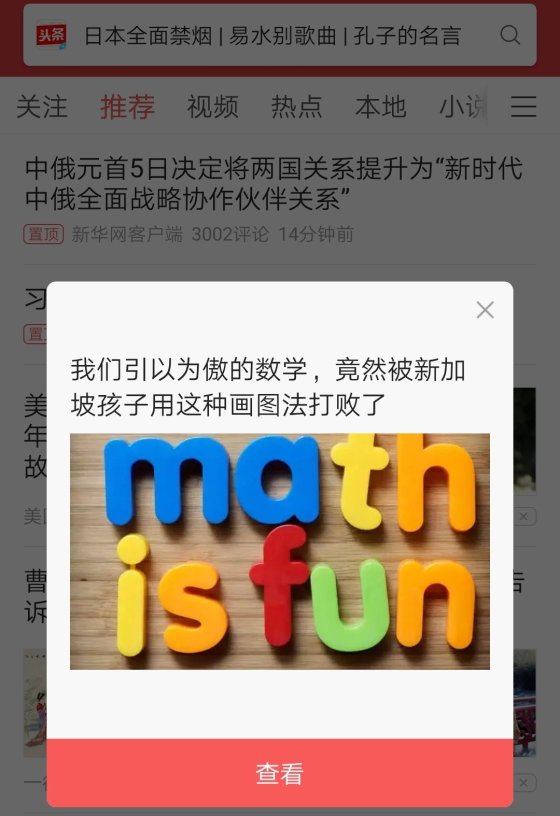 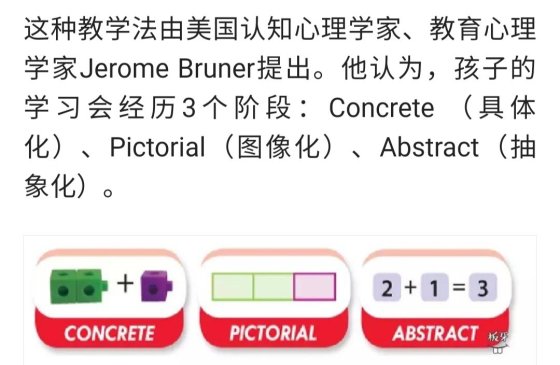 Singapore Math inherits both the strengths as well as the weaknesses of Chinese Math & English Math:

Singapore Math is only good for kids from 7 to 15 years old (PISA age is 15). From upper secondary Math (at 16) to A-level or Baccalaureat(at 18) or 中国高一～高三, the French Math is better for laying foundation in abstract thinking, paving the way for advanced math in university & beyond – evidenced by the majority of Fields Medalists are French. (Read “How do the French Excel in Math” )

France excels in Abstract (aka New / Modern / Bourbaki) Math but poor in Applied Math, while Asian countries (China, Singapore, Korea, Japan etc) are opposite. This demonstrates clearly in the Asian 15-year-old students scoring Top PISA Math Tests & Math Olympiad Championships (even in the USA teams), while the French young Mathematicians (< 40 years old) take 1/3 of the world’s Field Medals – “the Nobel Prize of Math”.

It is ideal to combine the Asian (applied) Math pedagogy for Primary school (from 7 to 13 years old) math and the French (abstract) Math (eg. Set, Group, Ring, Field, Vector Space, epsilon-delta Analysis…) in high-school math (from 15 to 18 years old).

The wise Cédric Villani is just doing this Ideal Combination of “East and West” for French Primary School Math Education .

Note: In the video (12:12 mins) Villani described his “Eureka discovery” inspiration at 4 am in Princeton Institute of Advanced Math. The same experience found by many mathematicians eg. Poincaré, Zhang Yitang, etc. Read Villani’s book where he called this “Strange Head Voice” (definitely not hallucination!!) experience as “The direct phone call from God “.

In 2005 during his public Math Olympiad books launching seminar at NUS bookshop, the 70-year-old Prof Lee started his talk on the genesis of “Singapore Math” idea with this famous ancient Chinese Math “Chicken and Rabbits” (鸡兔问题)。

“Every (Singapore) school is a good school” – Mr. Heng (Former Minister of Education of Singapore)

UK, USA, France are copying Chinese Math (from which the “Singapore Modeling Math” derived) in Primary schools, this proves my above-mentioned “Ideal Math” formula is correct. The 2 Asian countries were top in 2015 PISA Math Test for 15-year-old students, while UK was ranked 27th.

Note: Shanghai used to represent China to be the World Top PISA in math for decades till averaged down by other chinese cities. 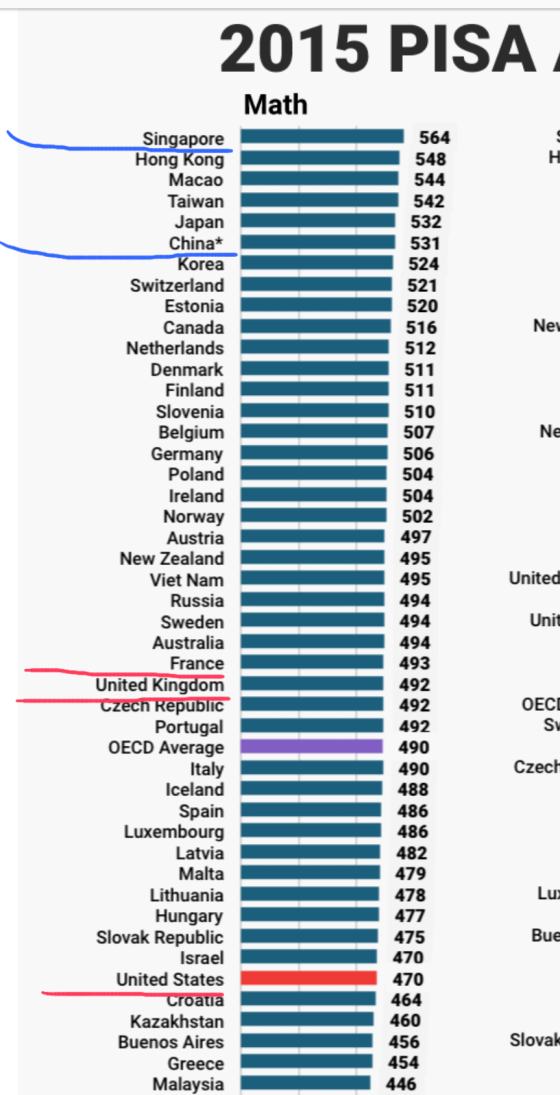 It remains to see if China / Singapore reciprocate the French Math theoretical foundation rigor in High Schools (Junior Colleges) and in the first 2 years of undergraduates for STEM (Science, Technology, Engineering, Math) students.

Compared with Fields Medals (equivalent to Nobel Prize in Math), the picture is reversed – where USA, France and UK are top. The secret lies in the formula : the multiplying factor – (* French), ie the math theoretical foundation notably in French Math. 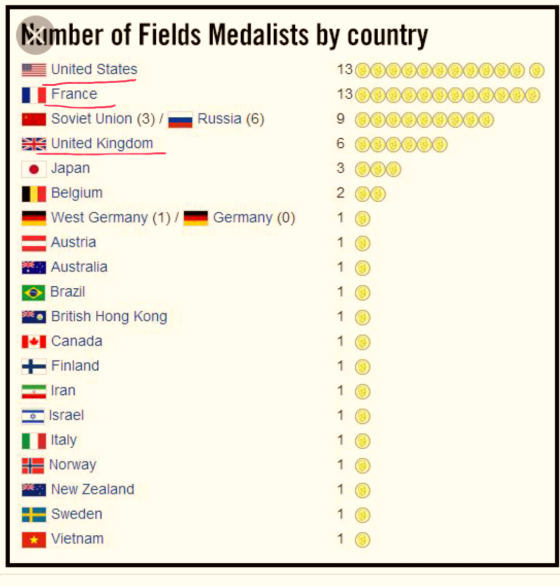 Below is the “Singapore Math” shown by a USA School adopting the pedagogy.

I had the opportunity to meet the inventor of the “Singapore Math” Prof Lee PengYee (李秉彝) in a Math seminar at NUS few years ago, who took the inspiration of the 1960s ~ 1970s Chinese School (P.S.L.E.  / Secondary 1) Math 算术 (literary means “Counting Technique” sans Algebra), combined with the Polya 4-Step Problem Solving Methodology [Video by Polya], with a visual tool called “The Model Diagram”.

Note: This pedagogy is based on Concrete Visualisation, while good for majority of young students (7 to 13 years old) to learn computation and problem solving, it doesn’t train the opposite skill from young in “abstractness” (eg. Basic Set Theory) which is the foundation required in university Advanced Math, where the French, Russian and USA university students excel more than the Asian cohorts.

The Ideal Math Education for the next 22nd Century:

Current Math education is biased towards any one &/or two (out of the three): 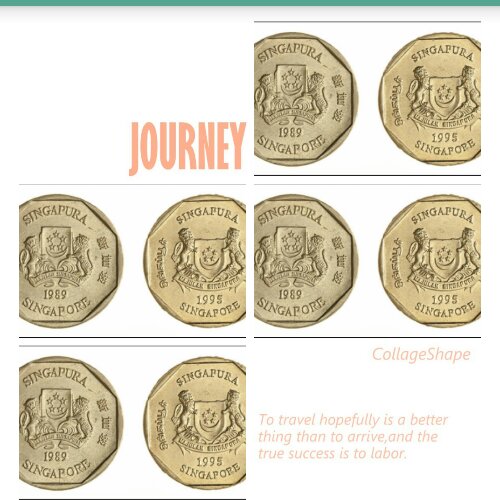 PSLE is “Primary School Leaving Exams” for 11~12 year-old children sitting at the end of 6-year primary education. The result is used as selection criteria to enter the secondary school of choice.

Hint: Without seeing or feeling the weight of the $1 coin, you still can guess the answer. This is the essence of “Singapore Math” — using “Guesstimation“.

Compare below the Singapore Math versus Algebra Method: 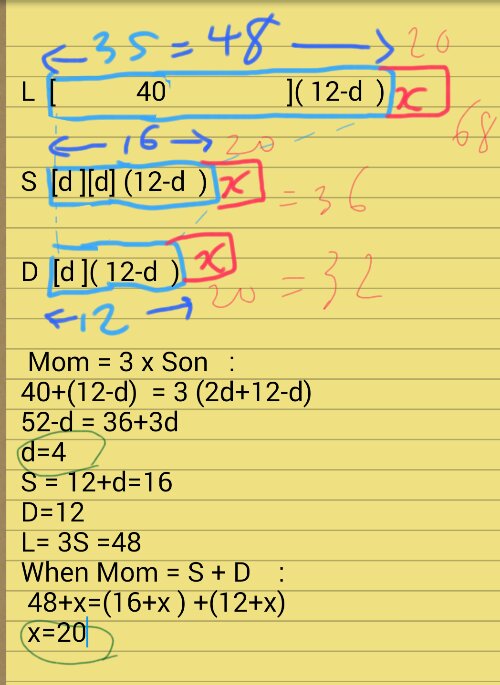 Algebra Method: Try yourself !
(It involves solving 2 equations of 2 variables.)

There are certain types of problem easier to solve with Modelling (example: this one and the “Monkeys & Coconuts Problem” with Modelling Method); whereas there are some other types difficult to visualize in model, but straight forward with Algebra Method.

The problem is as follow:
R is 3 times older than S two years ago. From now 2 years later, their total age is 32. How old is R now ?

The famous Singapore Math for children in primary schools is based on  visual models.

The Singapore Ministry of Education has published a new 2013 Math syllabus for primary and secondary schools, which will roll out in examinations within 4 to 6 years. Todate only Primary 1 and Secondary 1 Math syllabuses are published here: